It's been a long time - again - between builds. I have been working on a 1:48th scale Airfix Sea Hurricane that my friend Mark bought for me. He purchased it at the Ipswich Club show because I had bought a pack of WWII Coastal Command paints to go towards my proposed theme of the Banff Strike Wing.

As you can see, it is coming along quite nicely but... (isn't there always a but with me?).

I never, ever, ever, attach anything that may break until I have finished decalling so why did I fit the undercarriage legs? 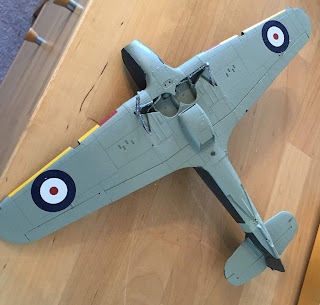 As you can see, the port (left)  leg has broken off. Fortunately, Airfix can supply a replacement part for £2.00! Hence, it is now on hold until I get that. Incidentally, I used Tamiya sky for the band around the rear fuselage and found that it didn't match the colour of the underneath. It seems that the Vallejo sky is quite a bit darker than the Tamiya but it is too late now as I have started decalling.

In between, I have decided that I must get on with some modelling rather than just sitting and staring at a computer! I have the fantastic Tamiya 1:24th scale Mercedes AMG GT3 along with a bottle of Zero paints body colour so, under pressure from my wife to "get on with something!" I have opened up the box and started work. 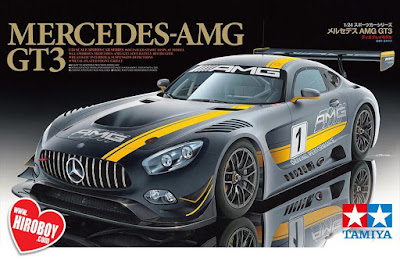 The Pennington curse hit at that point. I got out my airbrush to spray the base colours (having given everything a coat of Tamiya surface primer) to find that my bottle of X-18 Semi Gloss Black was empty and my usual trusty large bottle of Vallejo Black primer was totally absent! Valerie is going out so I now have to wait until she comes back to pop up to Hobbycraft for some spares!

Posted by Long Haired David at 4:49 AM