A Tail of two spitfires (joke!!)

I have finished both Spitfires. In spite of their small size, I found them quite time consuming to complete. They were very fiddly and needed a lot of work.

First off is the more normal Spitfire in camouflage. This is the Spitfire Mk IXc flown by Otto Smik, No. 312 Squadron, North Weald, Late August 1944. 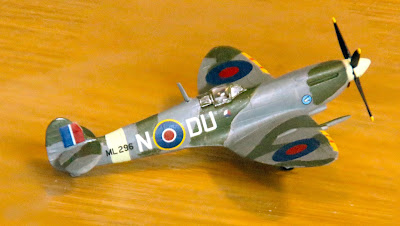 There is always a saga with any aircraft that I build and this was no exception. As mentioned, I lost one of the tailplanes. This meant that I had to make a new one from plastic card. I measured the thickness of the existing part which came out at around 1mm but when I used 1mm card it seemed way too thick. I reverted to two layers of 0.2mm (I didn't have any 0.4mm to hand). I had a couple of goes at it and finally I got something that looked the part. 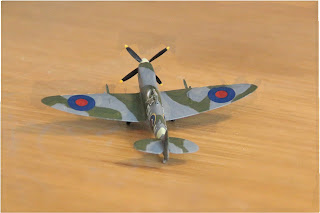 The tailplanes look a bit askew at this angle but they actually sit on the tail OK. Once painted, it looked fine. What next? Well, the radio aerial is moulded onto on side of the fuselage so, with all of the handling, this got knocked off - as it usually does with me - even if I try hard. I got a length of 0.7mm brass rod and flattened it with a small hammer. I then filed it to shape, cut it to length and fitted it using Gator's Grip glue. As you can see from the top image, this came out OK.

Lastly, I had a brain storm and painted the two greys in the wrong order. The upper surfaces got painted in medium sea grey and the lower in ocean grey - wrong! Having sprayed all of this, I really didn't want to go back to masking everything out - especially the upper camouflage - so I hand painted the greys in the opposite way.

The second Spitfire was an unusual one.  It is MJ250 from No. 601 Squadron in Italy during the Summer of 1944. This is unusual because it is in bare metal. The normal reason for this is to eek out as much top speed as possible. The interesting thing about the scheme is that there is the usual anti-glare panel on the upper surface of the nose which is normally painted a matt black. On this aircraft it is dark sea grey and dark green - although I used medium sea grey so I got that wrong! This one went together quite well. The finish is the new Vallejo acrylic Aluminium paint which I airbrushed on over a coat of Vallejo Gloss Black primer (just released to go with the metal colours). This finish seems to be as good as I would get by using Alclad. The big advantage is that I don't get my wife complaining about the smell.

As mentioned, I also had to replace the radio aerial on this aircraft as well. 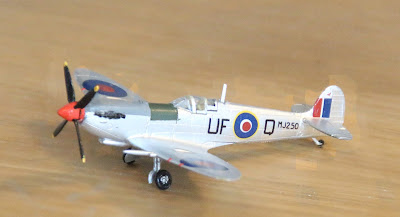 Overall I am quite pleased with these two although they were more fiddly than the Revell US Navy aircraft I have been building. They are nice additions to my growing group of 1/144th scale models.  Here is the full collection: 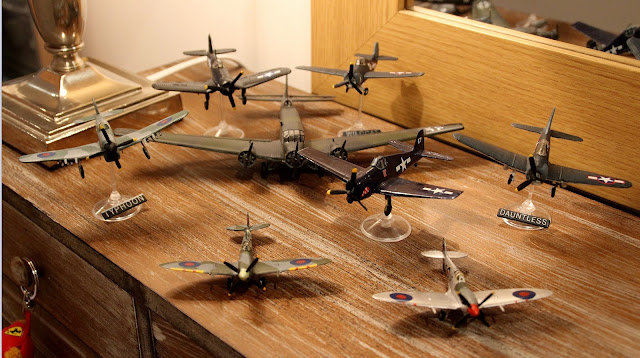