One finished for the Clacton Club

I had a plan – I have an Eduard limited edition NATO Viper that I was going to finish for Clacton. However, it is a very complex kit and I got as far as the baseline painting. I realised that I wouldn’t finish it in time so I broke out the BOAC Whitley that just needs some undercarriage and props.
Well, that idea went down the toilet when I saw that the undercarriage struts were broken. The side struts are OK but on both units, the joining bars between the struts were cracked separated from those struts. I can probably repair these using brass and poly rods but, again, there wasn’t enough time.
So, I did what I always do in the circumstances. I pulled out a 1/144th scale kit and got that together with 30 minutes to spare on Thursday night. The kit I chose was an Academy Panavia Tornado. The kit colours are for the Gulf War (the first one, that is). I had already got hold of a pot of Xtracrylix Desert Pink so I was ready.
Here it is. The kit hasn’t too much detail. I made the usual silly – I lost one of the nose wheels so I had to cut a piece of sprue and file it to thickness. 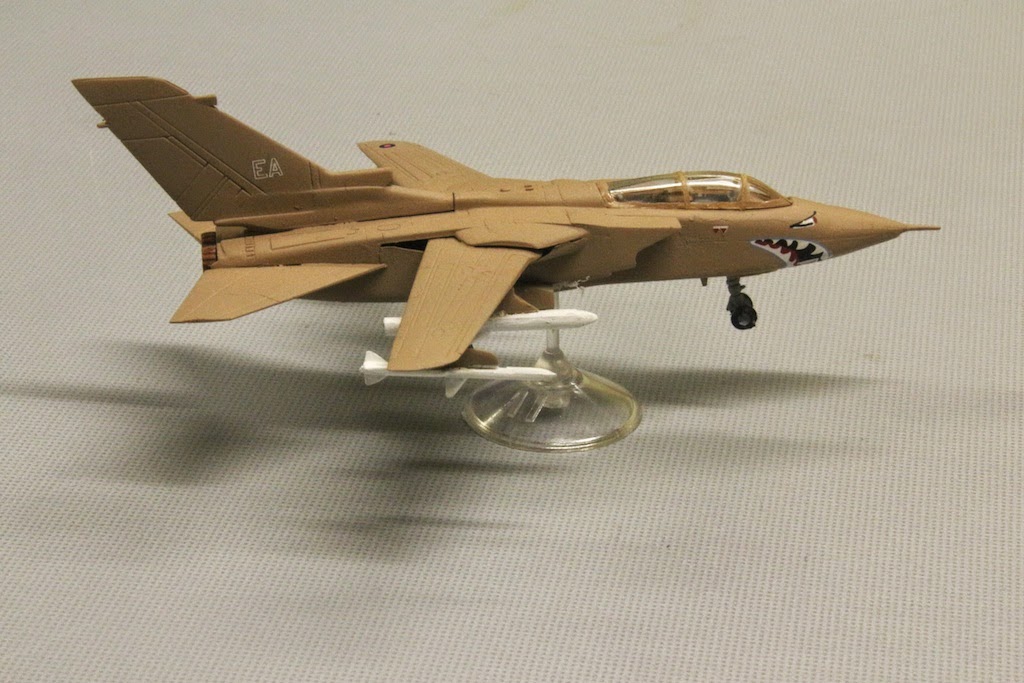 So, what else went wrong? I put the wings in upside down. I forgot to add any nose weight. So, the body got split apart. The liquid lead was a bit too proud so I had to get the Dremel out to grind the lead down. Along the way, I cut the edges of the fuselage so that needed a lot of filler to sort out. I left the wings able to swing but realised that this wasn’t a good idea. On the real aircraft, the weapons swing with the wings but on the model… no chance. So swinging the wings would leave the weapons looking ridiculous. I glued them in a landing configuration.As I was late in finishing, I wasn’t sure that the undercarriage was strong enough to hold up, given the lead in the nose so I took a spare Revell 1/144th stand and mounted it on that. It’s OK but I really must put some effort into finishing a decent model for the club.