I have already made a 1/72nd F-16B in Israeli colours. It is a Hobbyboss kit and was the first successful plane I finished in about 12 months. 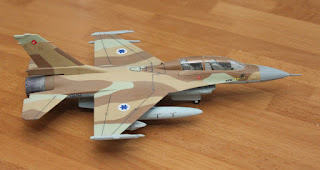 I am now working on an F-16I Sufa - Hasgawa 1/48th Scale. I did intend to do it with the canopy closed with the two figures in their seats. However, I have masked the canopy and then tried to seat it down but it won't sit right so I am thinking that the heads of the figures are stopping it coming as low as it needs. As the canopy is masked, I can't see what is going on!

Mind you, you can't see much in the cockpit with the figures in place so I don't think it will make much difference if I have it open or closed. Let's see how we get on.

The filler on the underneath is where there is a moulded area that isn't on a Sufa. You get a standard F-16 from Hasegawa then a bag full of new sprues which contain the conformal fuel tanks and all of the extra bits a Sufa has. Sometimes you are drilling new holes and sometimes you are filling in holes. So far I am doing alright with this one. I am enjoying it and haven't yet made any stupid mistakes. I narrowly avoided one when I stuck the nose on, having forgotten to add the weight, but I caught that in time.

Current disaster - there is always one - when taking the photo of the F-16B, I put my camera down and because it was off balance with the flash gun on top, it toppled off the work top. The flash gun has broken off and the foot that is gripped by the camera to hold the gun on has broken! I tried Plastic weld, which will stick most plastics but that didn't work. I am now trying super glue but think it may crack under the strain. If that happens, then my last real resort is Gator's Grip. Watch this space! 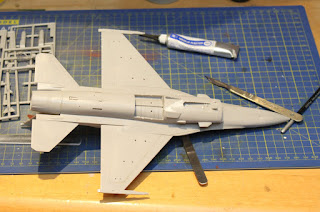 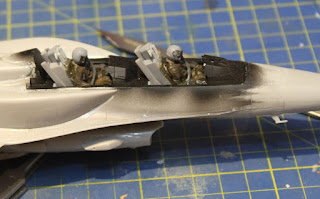 To judge my airbrushing skills against the Israeli airforce, check out this photo: now that is some overspray!
Posted by Long Haired David at 9:10 AM

Ilove the F-16. We were supposed to get these at our air base whne the A-10's left buit it never happened. Great paint job!